Early on Sunday morning, a young Melbourne woman reached out to us in distress. She had just had her eyebrows tattooed elsewhere the day before, and was very upset, disheartened and distressed by them.

She sent us photos of her eyebrows seeking for help and advice. Danni wanted to have them removed or fixed immediately. With Danni's consent, below are the "before" photos of Danni's eyebrows, before her eyebrow tattoo correction journey begins. 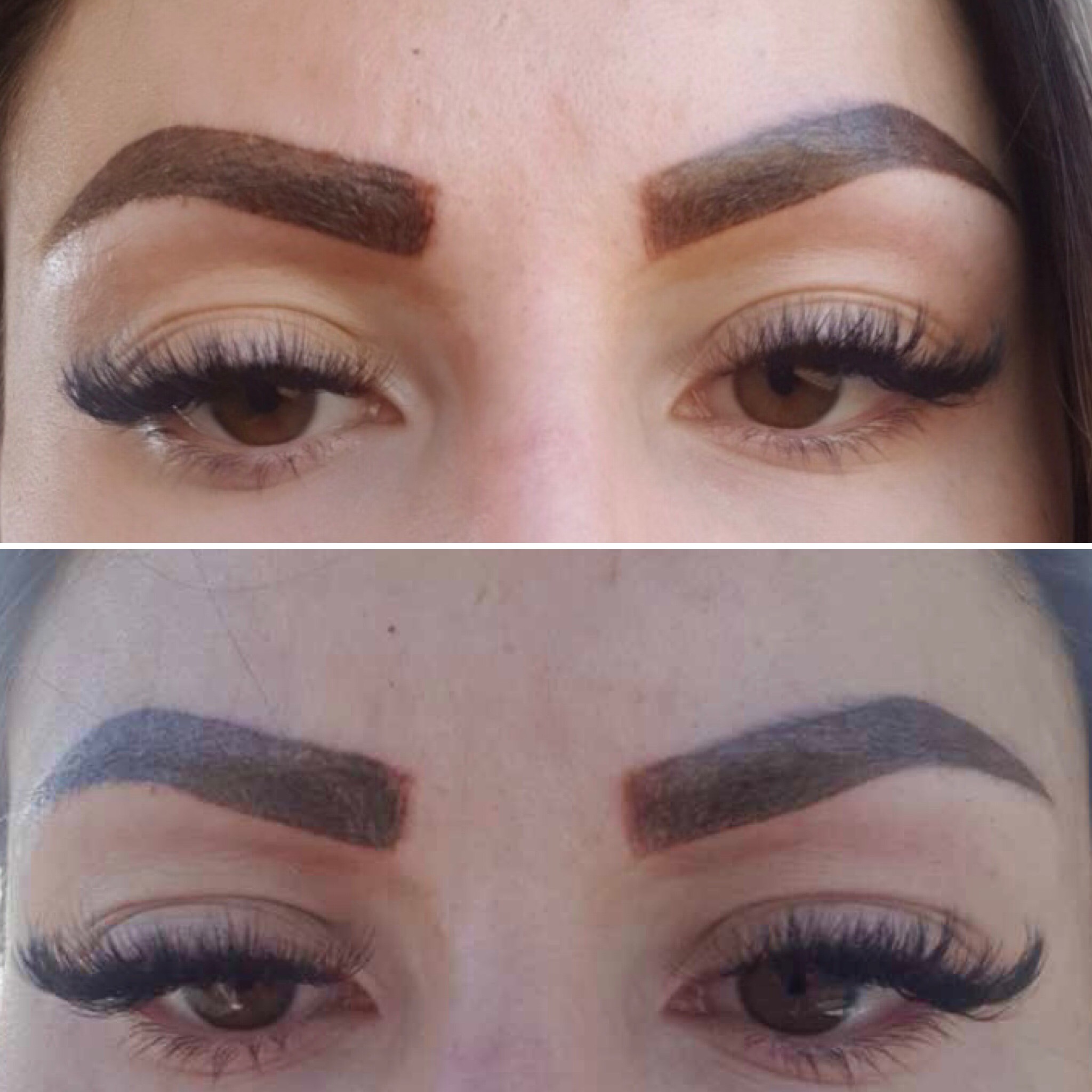 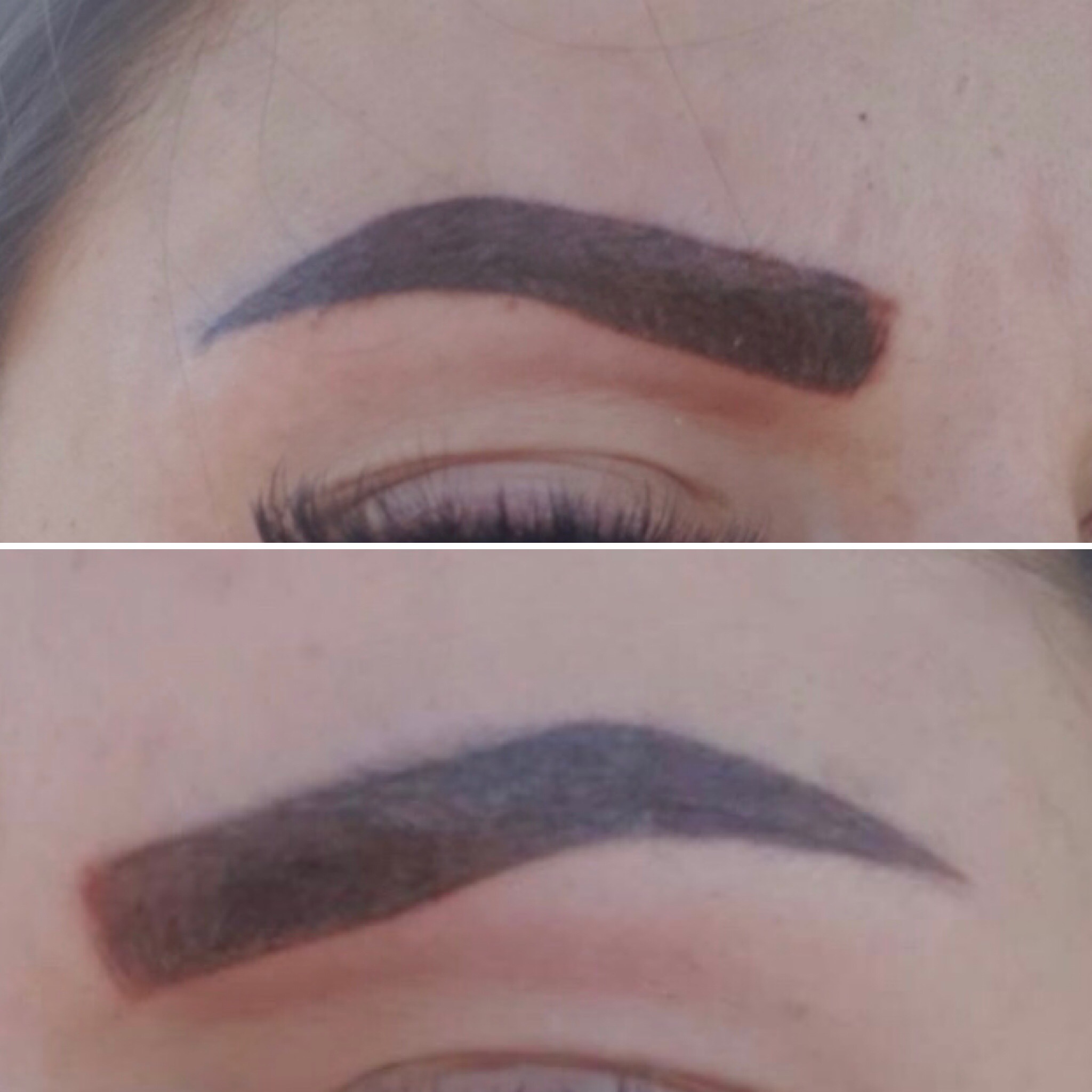 I was supposed to have eyebrow microblading and they completely stuffed it up. It was incredibly painful and I am so horrified with the result, I can't even go outside or go to work like this. I came back for the touch up and now it's even worse. Now I have these big crooked angry brows with frames around in the wrong shape. And random lines on my face and strokes in all wrong directions". Danni was in tears on the phone with us.

Eye Art Studio suggested for Danni to discuss the concerns with her Artist, Danni no longer felt confident or have faith in the Artist to be able to correct her tattooed eyebrows and sought our advice on the best way to fade and repair them. Because Danni wasn't able to visit us within 24 hours from her last eyebrow tattoo session, Danni was given some tips on how to safely fade eyebrow microblading at home. An appointment was then made for Danni for 6 weeks later to give her skin time to heal.

Danni kept in close contact with us during the 6 week wait. She was very diligent in following our advice to safely encourage the fading of her unwanted eyebrow tattoo, and patient in waiting for her skin to heal and be healthy enough for the removal.

Although Danni was extremely nervous before and during her first removal session due to her negative experience, she was positively encouraged upon seeing dramatic changes to her unwanted eyebrows, as we were able to lift and remove a lot of the pigment (the ink version that is used during cosmetic procedures) from underneath her skin. 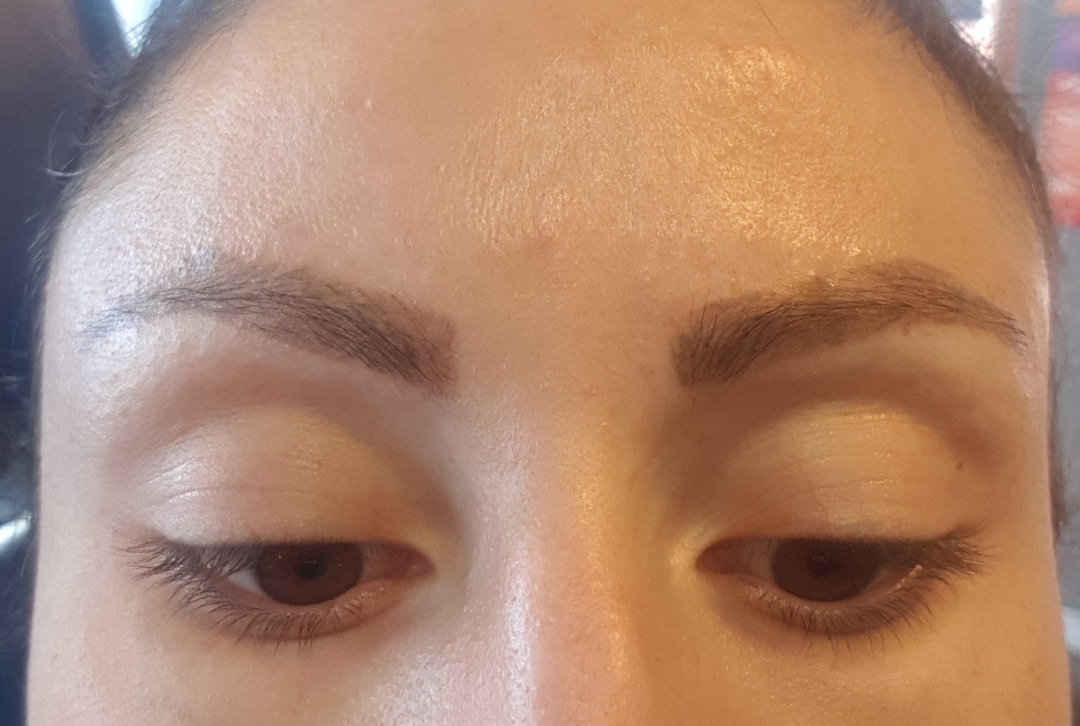 Danni continued to diligently follow our aftercare guide to minimize any skin damage from the trauma previously caused by her previous eyebrow tattoo treatments. A second removal session was then booked for Danni  week later. During which, she was very excited in sharing with us that her post eyebrow tattoo removal healing process was very easy and stress-free, and that she was very surprised and pleased with her results so far.

Because Danni's eyebrow tattoo removal process was going great - we booked her in for an eyebrow tattoo correction appointment 6 weeks following her 2nd removal session, as the base color within Danni's tattooed eyebrow was faded enough for fresh eyebrow tattoo to be created over. Below are our results. 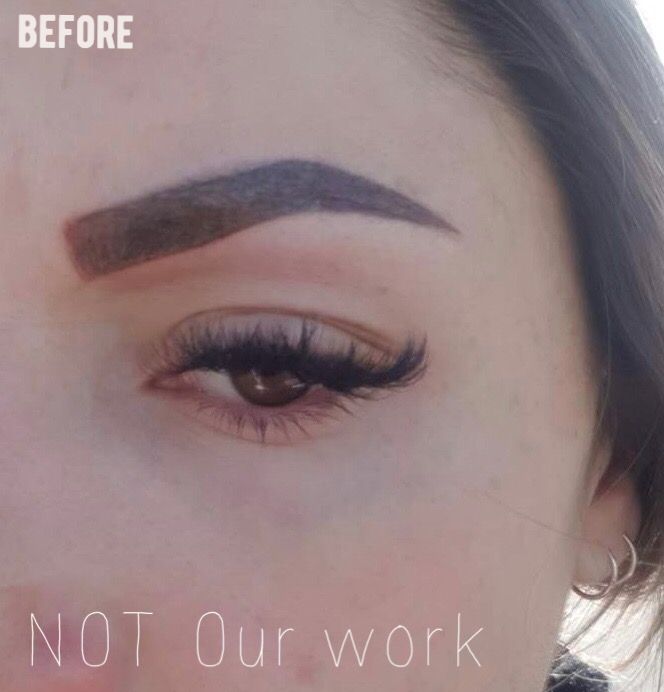 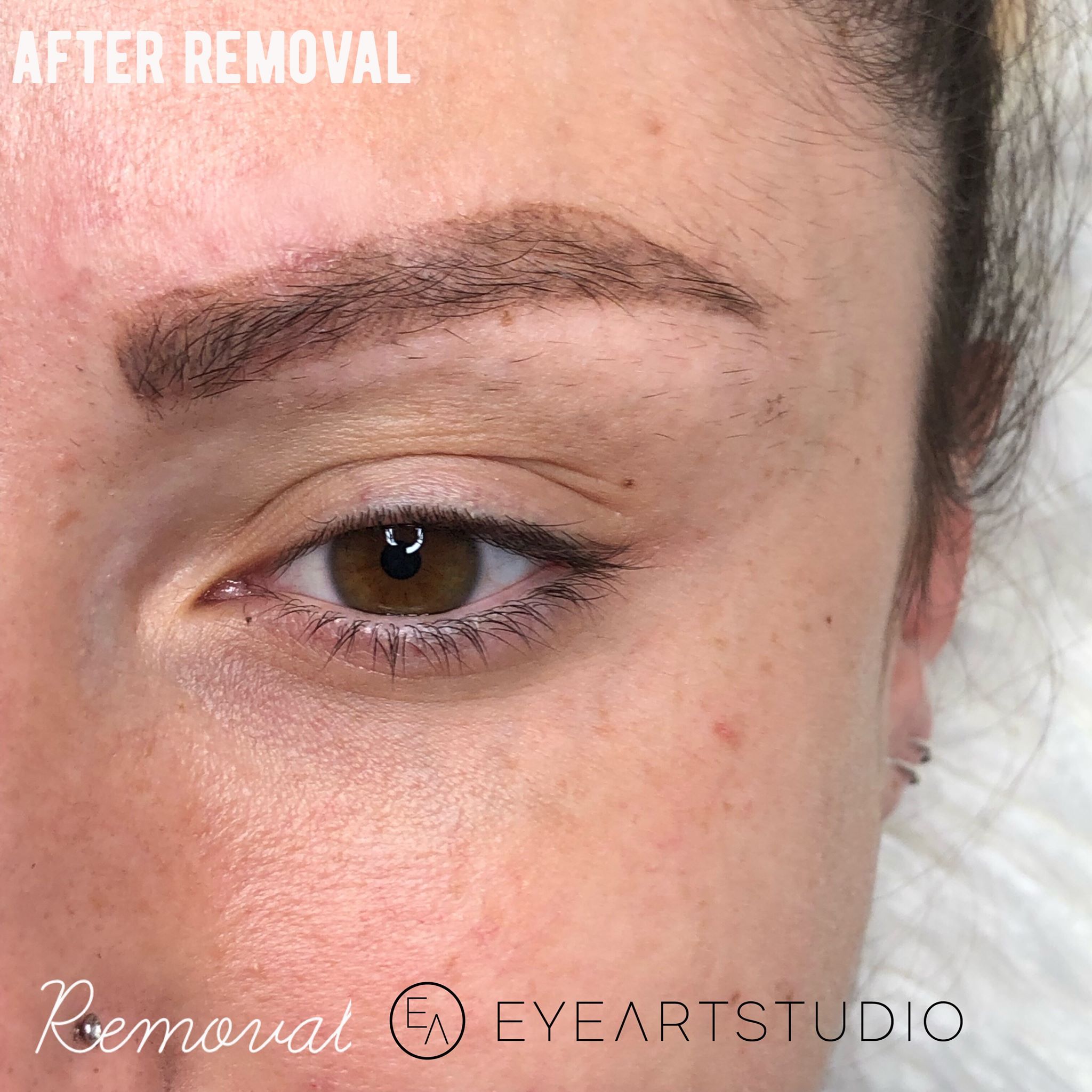 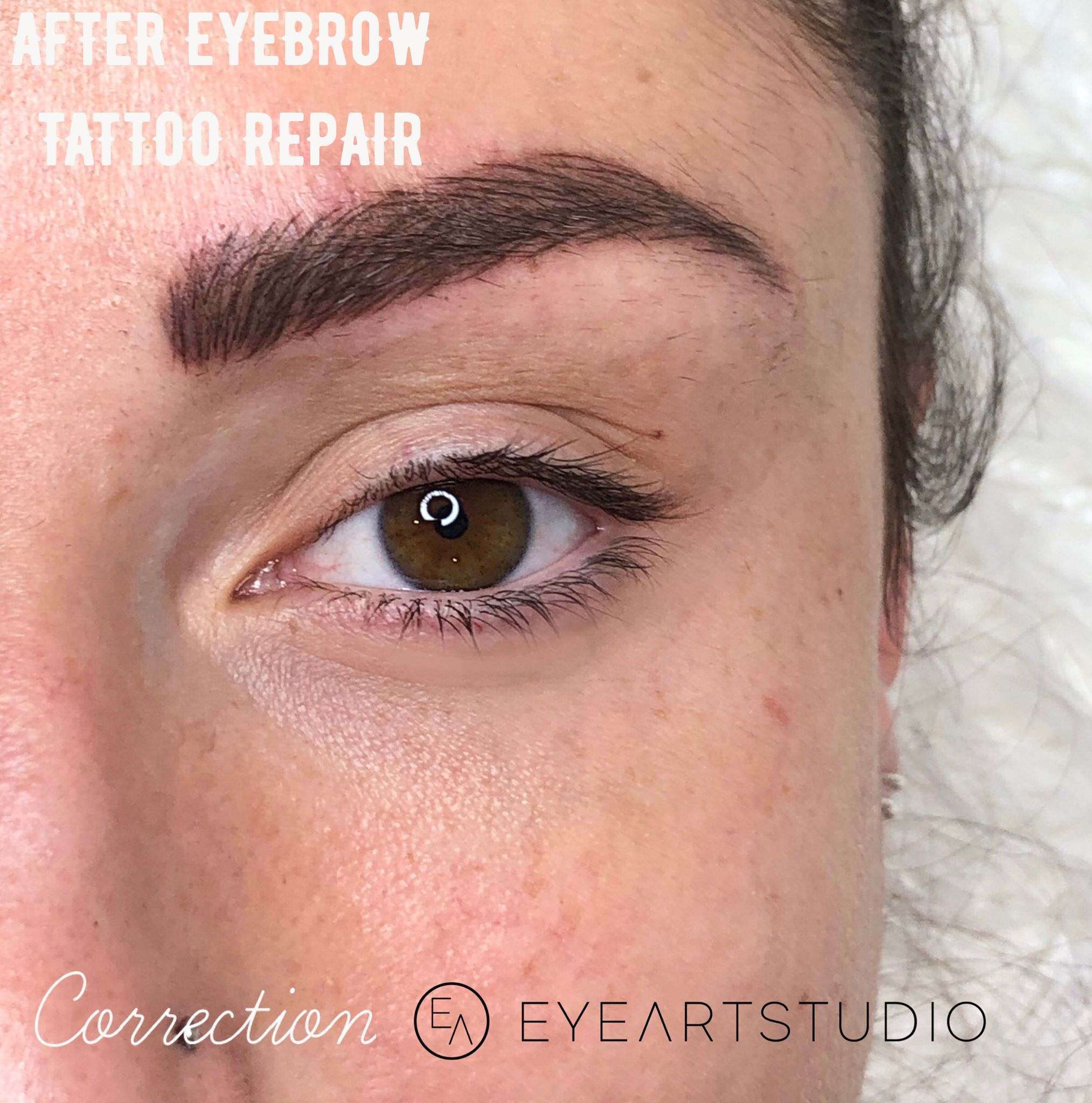 As much as we would love to offer an immediate, magical solution to simply correct and repair unwanted eyebrow microblading and tattoo for every client, sometimes this is not possible due to the color, depth and saturation of the existing tattooed eyebrows. This is when eyebrow tattoo removal sessions are necessary, as attempting another layer of microblading over current darker brow tattoo would only be a very short term (weeks) fix and will only worsen the concerns. Eyebrow tattoo pricing may seem expensive, but choosing the right qualified, experienced Artists will save a lot of money and time in the long run. Danni's eyebrow tattoo journey has taken almost 5 months to get her eyebrows to where she would like them to be.

Unfortunately, in trying to help clients, Artists who are not efficiently trained in eyebrow tattoo correction may offer help when it will only add to the issues. For further information on eyebrow tattoo, cosmetic tattoo in general or eyebrow tattoo removal details, visit our info link for frequently asked questions and answers. 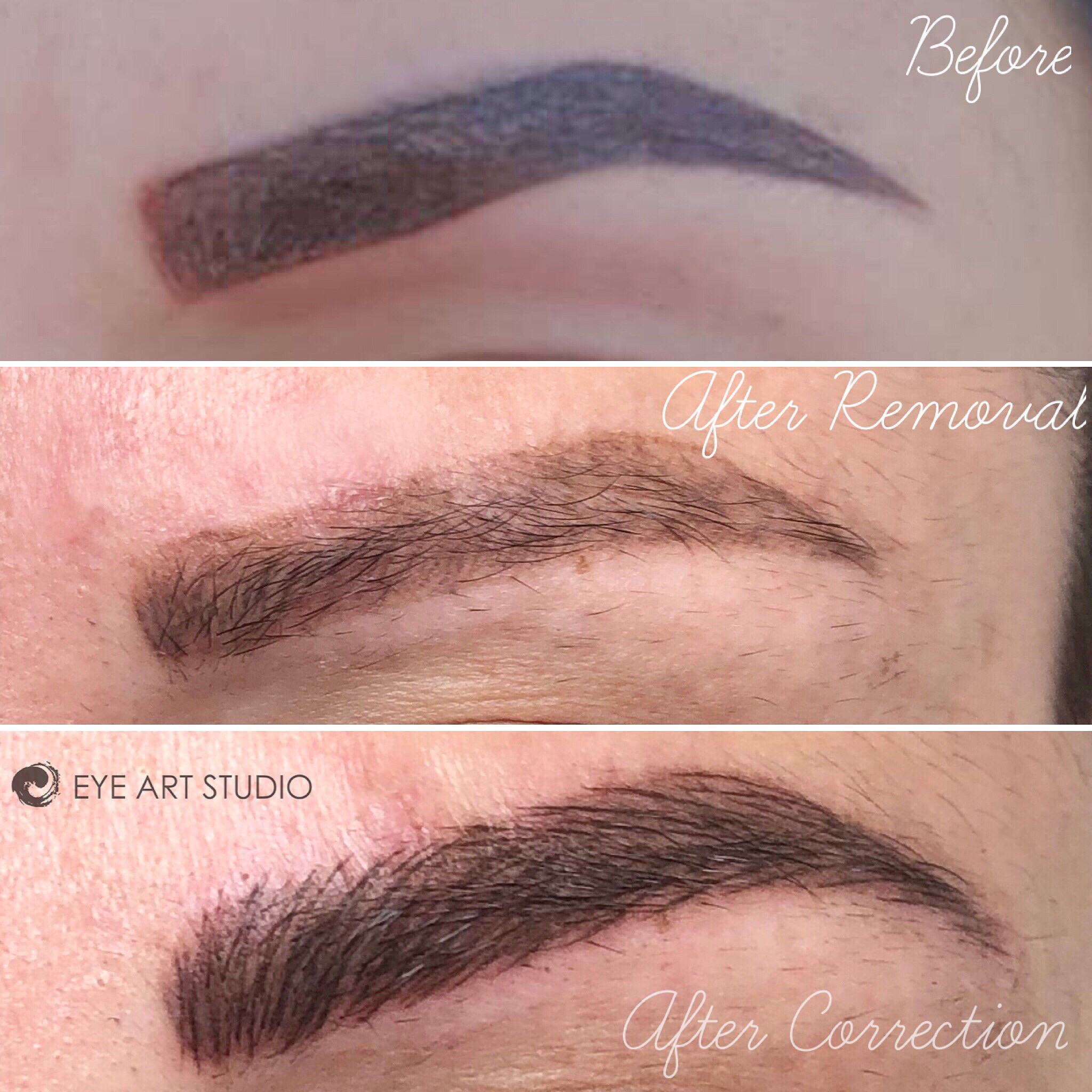 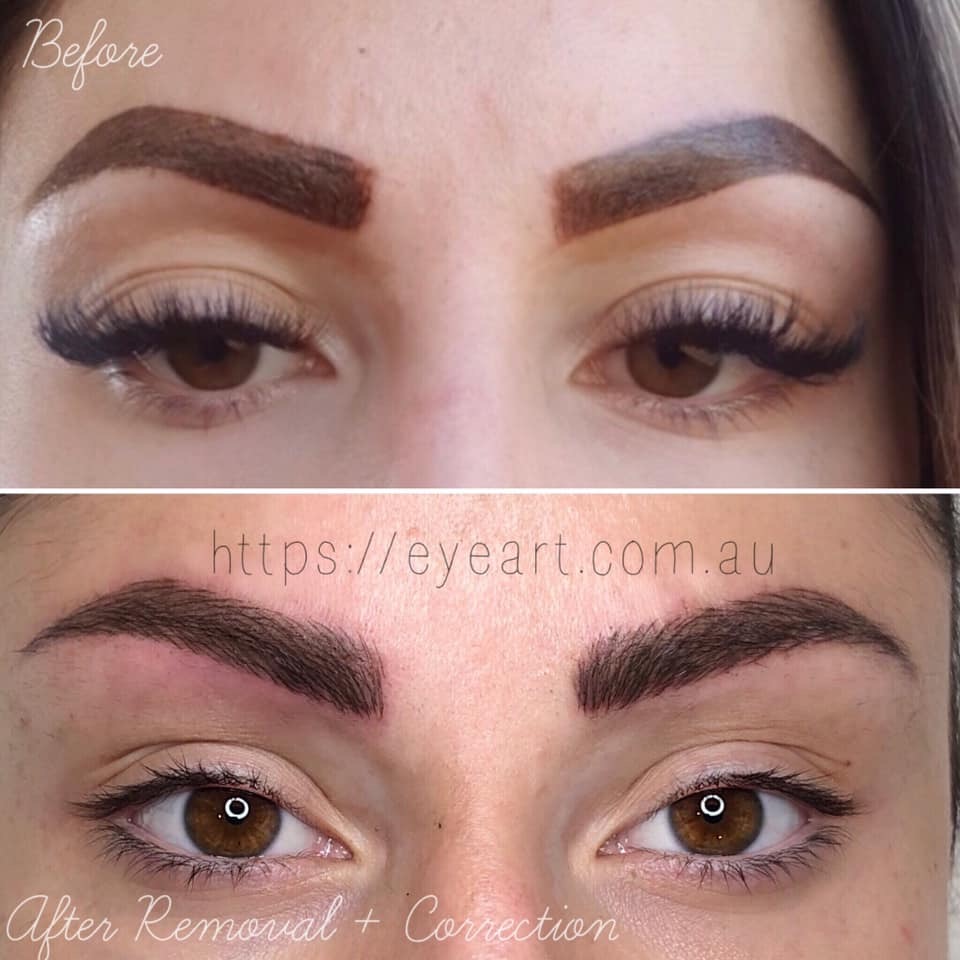 There are many misconceptions regarding eyebrow tattoo removal. The biggest 2 concerns clients seem to have are:

Not at all. Done correctly and following the right aftercare advice, clients have reported better skin condition upon their return visits to Eye Art Studio.

I hope you have enjoyed our blog post sharing Danni's experience with eyebrow tattoo removal and correction and her results.

>> How much does eyebrow microblading cost? What is the price of eyebrow tattoo in Melbourne Australia? Everything you need to know right here!

What Is Eyebrow Microblading Tattoo?

>>  What Is Eyebrow Microblading Tattoo? All You EVER Wanted To Find Out In This Article by Eye Art Studio.

>> Curious about how eyebrow tattooing is done? A guide from the Professional Eyebrow Tattoo Artists that will tell you everything you wanted to know!